The courtyard and outbuildings

Three new granges were built on the south-east side of the chateau at right-angles to it. These are large two-storey structures which served a variety of uses. They are not on the 1825 map and their appearance and construction match the new work on the chateau itself. It is pretty certain they were all built in the same years. Most outbuildings attached to chateaux in this area were laid out in a similar way. In this case a courtyard was created between the western and central granges by digging and walling in a short “moat” parallel to the road, with a small bridge in the centre to allow access. High stone gate piers made of large blocks of smooth-faced stone and quite elaborate moulded capstones were put up on the road side of the bridge, supporting a pair of high but quite plain iron gates. Until recently these gates and posts stood in isolation – no walls or railings were added to connect them to the granges on each side. But about 30 years ago a beech hedge was planted which now makes a good barrier.

Most of the domestic business of the chateau took place round this courtyard, which also housed the well just outside the kitchen door. Routine access for carriages and deliveries was via the gates, and for most of its life the courtyard had a circular grassed area with a tree planted at the centre, enabling vehicles and horses to circle round before exiting or returning to the stables or coachhouse(1). The present arrangement with four small lawns was introduced c. 2000 by the former owner Mme Marcelle Clochet.

With its new granges (also known as communs when used to support the domestic routine of the house) the chateau must have been largely self-sufficient. Most of the 19th century features are still evident. The western building, which is rather narrower than the other two, contains a bakery with large and small ovens, which was heavily used judging by the blackened timbers and brickwork. This area, in the centre of the building, was impressively renovated by Michel Fraboulet c. 2002 while he lived at the chateau with Mme Clochet. M. Fraboulet also carefully repaired the rest of the ground floor interior of this grange, which also included two large former storage areas; a six-seater earth latrine (since converted into a heating equipment room); and what is said to have been the village lock-up - all to provide extensive gallery space for Mme Clochet’s paintings. M. Fraboulet also renovated the coachhouse and farrier’s forge at the north-western end of the central grange. The rest of this central building consisted of stabling, a tack room, and possibly the coachman’s lodge. Mme Clochet converted the latter area into accommodation for a caretaker in 2006, and it was further modified by the present owners to form a gite for people to stay in.

The area between the central and eastern granges was used for access to the park and parts of the farm, and for herding animals. Until very recently there was no barrier on the road side, and the “tradesmen’s entrance” at the centre of the present hedge was only installed by the present owners in 2011. Why the stonework of the eastern grange is of rather better quality than that of any of the other buildings including the chateau is not known. It appears never to have been rendered. This was the main farm building and housed a large cart shed and various areas for animals including a range of cow stalls which are still present in their original state. But it is not now in regular use and requires considerable renovation inside. The upper storeys of all three granges were formerly used for drying tobacco leaves on long strings. 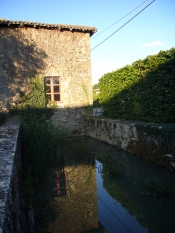