Chateau de Pleuville was rebuilt by the Favre d’Echallens family in the 1860s, when it became a fully functioning and independent country house and farm. It remains largely unaltered and is now owned by Susan Lowe and Alan Ward. Pleuville is a village in the northern Charente, near the towns of Charroux and Confolens. The nearest big cities are Angoulême, Limoges and Poitiers. 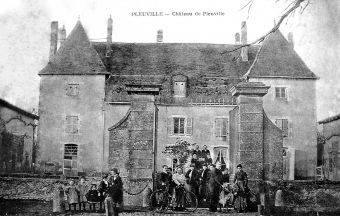 The property consists of a large house, three extensive granges (multi-purpose outbuildings), a 4 hectare park which includes an area of woodland, and several ponds. The main courtyard is bounded by a moat and formal gates. Guests are free to walk in and enjoy most parts of the estate.

All the buildings are unaltered externally. Considerable repair and conservation work has been done in the house and two of the granges. Work in the house is likely to continue for many years and visitors may find evidence of this. But there is enough space for all requirements to be provided for without inconvenience.

At present we offer “ensuite” B+B accommodation, and a gîte housing 6-8 people can be be rented for longer periods. Availability and prices »