Places to visit and things to do

There are many interesting and worth-while activities and places to visit near Pleuville. Unless otherwise stated, we have been to all the places recommended below in the last couple of years, often with our own family.

They are arranged under the nearest town or village in alphabetical order. The rough distance from Pleuville by road is given in brackets after the place name. Most are within 30 kilometres, but a few more distant places of unusual interest have also been included. A contact phone number is given where available. Please also check the websites listed for exact locations, opening hours and entrance charges.

Most villages in the locality have a church which is worth a visit. Several are former priories or abbeys and may have additional buildings (eg Benest, Alloue). Others are small medieval structures which preserve the atmosphere of the past (eg Pressac, Epenède). There are too many of them to list individually.

Large privately-owned park featuring monumental sculptures by Antony Gormley, Andy Goldsworthy, Christian Lapie, Joel Shapiro and others. Outstanding kitchen and flower garden with integral watering system. Vast plantation of 170 varieties of oak. Excellent range of 18th and 19th century buildings (interiors not open to the public). Good for families with children, for whom there are occasional special activities. Open August, most of September and several other days in May-July – phone for details, or call by and read the notice outside! A remarkable resource not far from Pleuville.

Interesting quiet Charentais town with useful amenities - garage, bank, bakery, various shops, chemist, small Carrefour supermarket with reasonably-priced petrol and diesel, etc. The large hotel/bar/restaurant at the centre, which is currently up for sale, is adjacent to the site of a major fortified chateau, which has been gradually split up and converted into flats and houses over the last century. Various towers and other features are still evident and it is possible to walk round the whole site via the Place du Château and Rue du Lavoir, along the bank of the river Argent. The town is central to the most picturesque area of the north Charente, surrounded by pretty villages and hamlets.

Large museum of rural life on an isolated site north of Charroux. Includes animated life-sized themed tableaux of rural scenes from the past, and large collections of farming equipment and vehicles from earlier times. Open every day mid March-end of August, and most days in September. Various special events held in the summer such as old tractor rallies, demonstrations of old hand-operated and steam-powered machinery, bread making, craft and home-made food fairs etc. Check with the museum or Charroux tourist office. These open days are well supported by local people and make a good family outing.

Indoor goat farm and cheese-making company typical of this region. Open normal business hours. Visitors may look round the main shed which houses up to 900 goats, and watch feeding, cleaning and other routines. The various cheeses are on sale in the shop on site, and are regularly taken to Civray and other local markets. Well worth a visit. Children welcome.

Charroux is the nearest town to Pleuville and of considerable interest. It grew up round the abbey (see below), and numerous historic buildings still remain, including a very well preserved timber-framed market hall at the centre. There are two bars, a restaurant, various shops, and a 24-hour cash point. There is a repair garage, but it does not sell fuel. On arriving in Charroux from Pleuville, the last building on the left before the T-junction is the tourist office with full information about all the sites and events in the Vienne department (Charroux is just over the border in Vienne). Facing the tourist office is a cake shop which manufactures chocolates in-house. Charroux hosts a large open-air exhibition of paintings in early August, and one of the night time spectacles in the excellent Nuits Romanes series is usually held here.

The remains of the Benedictine abbey founded in 785, which became a centre of power in the region for several centuries. The tower still dominates the town. A major national monument now in the care of the Centre des Monuments Nationaux. Guided tours available every day except Mondays.

Extensive and substantial remains of a Roman baths complex, temple, and other structures, of international importance. Visitor centre, indoor and outdoor exhibitions etc set in a large park. Normally highly recommended, particularly for adults and older children; but the main structure will be closed for re-roofing work until 2017. Check website for what remains open.

Small working flour mill selling very good quality flour direct to visiting customers during normal business hours. Drive directly to Chatain from Pleuville on the D34 and straight on through the village. The mill is on the left about 2 km further on, where the road is nearest to the river Charente. Enter the mill building (on the left near the river) and find the man in charge. Purchase some flour (five or six different kinds to choose from), and he will normally allow a short visit, consisting of climbing two storeys and viewing the machinery in operation on each floor down to ground level. The mill was formerly water-powered, now electric. The equipment is mostly from the 1950s or older. It supplies local bakeries etc and is not a tourist attraction as such; but the staff are quite friendly and the visit very unusual and worthwhile. Children welcome but must be closely supervised at all times.

We have not visited it, although we have been to the linked L’Isle aux Serpents (http://www.ileauxserpents.com), a small snake zoo with indoor and outdoor sections, near La Trimouille. This seemed rather under-resourced and overcrowded during our visit.

Principal town in southern Vienne. Attractive bridges over the Charente. 12th-century church of St. Nicholas, remarkable inside and out. Several other interesting old buildings, new public baths, good cinema, bars, very good restaurant at the Hotel du Commerce with outdoor dining in summer,  pleasant main square which hosts the best general market in the region on Tuesday mornings. Museum above the tourist office on the square. The major supermarket in the area is the Intermarché on the main road into Civray when approaching from Pleuville via Charroux. The D148 road enters Savigné (now in effect a suburb of Civray) - Intermarché is on the right. Several other big shops also have branches here. In addition there are large branches of Lidl and Super U on the southern outskirts (best approached from Pleuville via Chatain, Surin and Genouillé on the D35).

Extensive local chateau and outbuildings which assumed their present appearance in the mid-18th century. Renovated in recent years using salvaged furnishings and fittings, with remarkable results. The owner has recently opened a museum of historic games in part of the premises http://www.tourisme-vienne.com/en/activite/869/chateau-d-epanvilliers-musee-du-jeu-ancien.

Small 17th century chateau in a lovely setting, technically in St Maurice-La-Clouère which adjoins Gençay to the north. Little altered over the last 100 years, the interiors of the house, chapel, stables, wash-house, bake-house etc. give a very rare, authentic account of family life before modern technology. Open frequently July – September but essential to contact the owner before arriving. Suitable for family visits. Highly recommended.

Compact 17th century chateau and garden damaged during World War II but superbly reinstated by the current owners with furniture, fittings and works of art of high quality. Several collections on display including rare kitchen- and tableware, tapestries. dolls etc. Fine roof timbers accessible via spiral staircase. The owner is also a collector of early printed books. Open afternoons in July and August, Saturday-Wednesday. Children need to be well behaved! Best to phone before planning a visit. Highly recommended.

Large picturesque village with many well-preserved old buildings. The streets have been pedestrianised and local development strictly controlled in recent years. Permanent small display of local costume etc next to renovated “lavoir” (traditional open-air communal wash-house). The remaining buildings of the abbey (founded 780) now used for local events. Interesting park on the banks of the river Argentor. Two very good restaurants:the Auberge St Jean opposite the church is well-appointed (especially the outdoor tables) in a half timbered building, but the food and prices may be better at the Auberge de l’Argentor which also has a large downstairs bar. Stop press: Auberge St Jean currently closed but worth checking.

Major government-owned renaissance chateau near the town of Thouars. The building was neglected and the contents dispersed in the later 19th century, but significant murals and decorations have been preserved, and these, with the main staircase and other fixtures would alone merit a visit. From 1993 many contemporary artists (including Sol Le Witt and Ian Hamilton Finlay) were commissioned to produce work specially for display at Oiron. Several areas were planned as modern interpretations of the “cabinet of curiosities” concept. The assembled collection, which includes numerous animated sculptures, trompe l’oeil pieces, interactive installations, satirical collages etc etc has remained in place since that period and the extraordinary building and contents have become world famous. Oiron is on the south-western edge of the “Loire chateau region” and can be reached from Pleuville in less than two hours by car. Access to most of the building is virtually unrestricted. Open all year. Plenty to interest children. Highly recommended.

See website for full details. One of the top European visitor attractions aimed at an international family audience. About 75 minutes’ drive from Pleuville but not really suitable for day visits as it is so extensive. Numerous hotels adjacent. We have not been recently (but when we did it was great fun).

Two lakes south of Chabanais were landscaped and enlarged in recent years to provide facilities for visitors. Sailing, fishing, birdwatching, swimming etc are catered for. The eastern lake (Lac de Lavaud), created by damming the river Charente, has two artificial sandy beaches at its southern end which are clean and safe. the one near the hamlet of La Guerlie has restaurants and other facilities. We prefer the other which is further south near a small place called la Chassagne. It is less commercial and ideal for a day out with children of all ages. Arrive late morning to secure a shady picnic spot before the French people arrive. Excellent pedalos.

It is best to approach Lac de Lavaud via Chabanais and Pressignac. Ignore signs to the lakes before getting to Pressignac. The beaches are fairly well signposted from there but have your navigational aids with you.

Large open-air zoo featuring hundreds of chimpanzees, gorillas, bonobos, many species of monkeys etc. Animals are uncaged and live much as in the wild. Very well run, extensive parking, two good cafes. Snack time for the animals is frequent and great fun. Excellent for all children. Allow several hours for a full visit. Highly recommended.

Substantial remains of the fortified chateau, begun in the 13th century and left to fall into decay during the 19th century. It is now in public ownership and has been consolidated and made safe in recent years. Spectacular site on an outcrop above the village and the river Vienne. Panoramic views. Excellent for children of all ages to explore; a good place to visit at the end of the afternoon. Open all year round free of charge except when events are being held there. Programme of events (including concerts, falconry etc) available from Confolens tourist office. Adjacent church of St Vincent, begun in the 12th century, is also worth a visit. 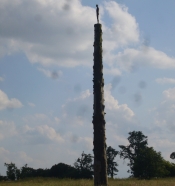 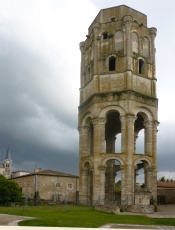 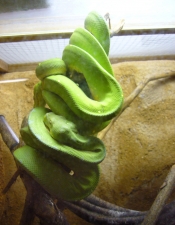 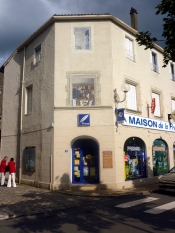